TIME TO ACT ON DACA 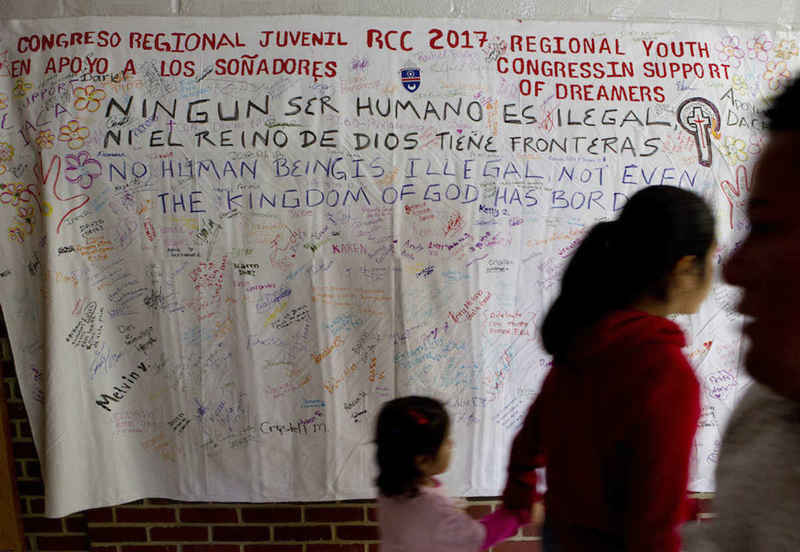 Once again, we begin a new year with uncertainty and fear over immigration, and this year our leaders in Congress face a hard deadline.

On March 5, the Deferred Action for Childhood Arrivals (DACA) program will expire, meaning that some 690,000 young people will lose their permission to work in this country and will face deportation.

Here in Los Angeles, this would lead to a humanitarian crisis.

More than one-fourth of the nation’s DACA youths live in California, and by most estimates there are about 125,000 living within the borders of the Archdiocese of Los Angeles — more than anywhere else in the country.

The story of these young people, called “Dreamers,” is well-known.

Brought to this country as children by undocumented parents or family members, they are not “illegal” through any fault of their own.

The “Dreamers” have lived their whole lives in this country — many are now in their 30s. And during their lifetime, leaders in Washington have not been able to reach an agreement to fix the broken immigration system that allowed them to enter in the first place.

Today, the “Dreamers” are the “poster children” for how broken our system is and how unhealthy and unproductive our political discourse has become.

By any measure, these are the kind of young people that our country should be encouraging. Nearly everyone — 97 percent — is either in school or in the workforce. About 5 percent have already started their own business; 15 percent have bought their first homes.

These are good kids and we should want to help them to develop their God-given potentials, to keep their families together and to make their own contribution to the American dream.

In addition, according to business leaders, they are vital to our economic future. In a letter to congressional leaders in September, more than 800 executives representing every sector of the economy agreed that DACA youths contribute more than $460 billion to our economy and another $24 billion in taxes.

Fixing DACA, then, should be easy.

Everybody seems to realize that it would be cruel to punish them for the wrongs of their parents, deporting them to countries of origin that they have never seen, where they may not even know the language.

And yet here we are. It is eight weeks until the deadline and these young people find themselves stuck in the middle of a much broader debate about border walls, national security and the inner workings of our visa system.

This debate is passionate and partisan, as it should be. Systematic reform of our immigration policy is absolutely vital to our nation’s future. And we need to have this conversation.

But Congress needs to separate the conversation about DACA from these larger issues.

Our system has been broken for too long and there is too much that is wrong. Congress should take the time to debate the issues properly and to truly fashion an immigration system that reflects the global realities of the 21st-century economy.

We do need a serious debate about border security. No one disagrees that we need to secure our borders and protect ourselves from those who would do harm to us.

Some say building a wall along the country’s southwest border is the solution. Others say we can use electronic surveillance technologies to create a “virtual” wall that would be far more effective and less costly.

The point is we should study the issue and not try to force a “solution” just to score short-term political points.

We also need to study how our country grants visas — our priorities and the criteria we use. Again, we need to study the issues and examine our assumptions.

For instance, there is a lot of passionate talk about how immigrants take jobs from Americans and drive down wages. Is this really the case?

In agricultural centers like California’s Central Valley, farmers this year again could not find enough workers to harvest their crops.

Even as minimum wages and benefits have risen across the country, employers say there are not enough American-born workers who want to do the low-skilled and low-wage work needed in our fields and construction sites, hotels and other areas.

This suggests that Congress and the states need to find new ways to offer guest-worker programs that would enable foreign workers to enter and leave the country as needed by businesses. It also suggests we need to think more clearly about our labor needs in renegotiating the North American Free Trade Agreement.

The point is that we need a total reform of our immigration system, and it should not be tied to the current debate over DACA and the “Dreamers.”

As a nation, we have a moral and humanitarian obligation to the “Dreamers.” These young people have done nothing wrong. And their futures hang in the balance of these debates.

So, I hope you will join me in urging our leaders in Congress to help them in a spirit of generosity and justice. And we need to tell our leaders that fixing DACA should be the first step in the systematic immigration reform that has long been overdue in our country.

Pray for me this week, and I will be praying for you. And may our Blessed Mother Mary intercede for us and guide us.