A NEW STORY FOR A NEW AMERICA 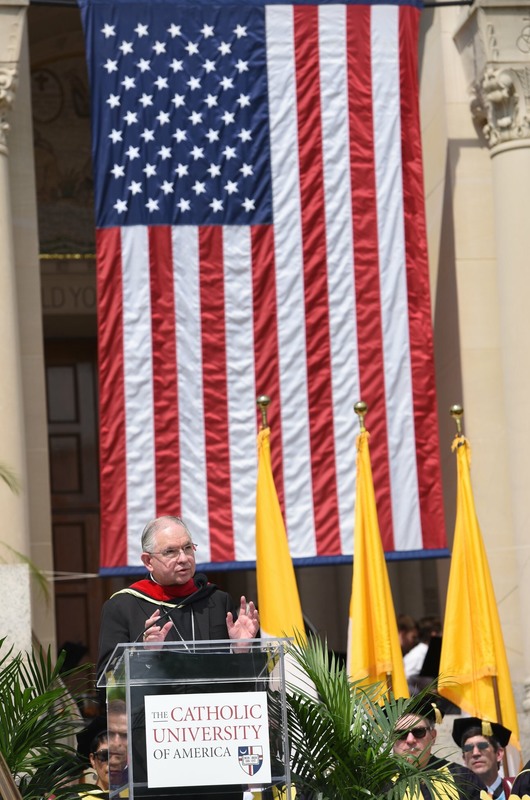 (Archbishop José H. Gomez delivered the 129th Annual Commencement Address at The Catholic University of America in Washington, D.C., on May 12. During the exercises, the university awarded the archbishop with an  honorary Doctor of Fine Arts degree for his contribution in advocating for immigrants. The university also conferred honorary degrees on four other immigrants who have made notable contributions to their communities and their new country. The following is Archbishop Gomez’s address:) For full video click here.

What an honor it is to share this podium with these distinguished Americans. What a witness. We are truly a nation that thrives on the gifts of peoples from every land.

Three years ago, I had the privilege to be here when Pope Francis canonized St. Junípero Serra. It was a historic moment, the first time that a Catholic saint was being canonized on American soil.

And it is interesting to think: St. Junípero Serra never even saw Washington, D.C. He was a Hispanic missionary who came up from Mexico to preach and build in California. And he never left there. The United States of America was not even established as a nation until the final years of his ministry.

But the pope made this decision to canonize Father Serra in our nation’s capital, because he believes we should remember him as one of our nation’s “founding fathers.”

Every people has a story they tell about where they came from and how they got here.

The story we Americans tell usually begins with figures like Washington and Jefferson, Madison and Hamilton. We talk about the founding fathers and their declaration that all of us are created equal.

But the American story started long before that. At least 200 years earlier, migrant missionaries were greeting the native peoples of the Southwest as brothers and sisters — from Florida to California, sharing with them the most precious gift they could imagine: the gift of knowing the living God.

Before I came to Los Angeles, I was the archbishop of San Antonio, Texas, which was evangelized by the legendary apostle of Texas, Venerable Antonio Margil de Jesús. The city is celebrating its 300th anniversary this year. So, our Christian roots run deep.

We don’t think about this much, but it is worth remembering: the first nonindigenous language spoken in this country was not English. It was Spanish.

America’s founders — including Padre Serra — dreamed of a nation where men and women from every race, religion and national background could live in equality; as brothers and sisters, children of the same God.

Their vision helped make this a great nation, exceptional in human history — blessed with freedom and committed to sharing our blessings with the whole human race.

Our history has not been pure. It has been filled with tragedy and violent betrayals of our deepest values. But always this vision of the human person has guided us to repentance and to try to make things right and better.

We can see the finest fruits of America’s founding vision here today — in the faces of this graduating class and the honorary graduates gathered here today. You are the promise of America.

But my friends, I know that many of you feel the way that I do — that our great nation is losing her way.

My dear graduates, you are entering an American society that is more anxious and more bitterly divided than I have ever seen in my lifetime. But the biggest challenges we face are not about globalization, technology or demographics. I believe our biggest challenge is a crisis of identity.

America has lost her way because we have lost the threads of our national story. We no longer know who we are as a people or what our national purpose is.

I say this is our biggest challenge because unless we know who we are and what we are here for, we will never be able to set the right priorities or find the right solutions to the many challenges we face.

My dear graduates, this is your calling in this hour in our history. To tell a new story for a new America.

The stories we are telling ourselves today are too small, too fearful. They are not generous enough to inspire us to meet the challenges we face.

We need to talk about American holiness and heroism.

America is alive in her saints — and we have so many! Mystics and missionaries; martyrs and immigrants; refugees and exiles. They came from everywhere to share their gifts and make this country what she was meant to be, a light to the nations.

There are indigenous saints, like Black Elk, the Lakota Sioux mystic and Catholic catechist. There are freed slaves like Father Augustus Tolton, our country’s first black priest.

The litany of American saints goes on and on and it includes servants of the poor like the Creole saint Henriette Delille and Mother Marianne Cope, who served the lepers; there are artists and activists like Dorothy Day and Thomas Merton.

The saints I know best are in my Catholic tradition. But there are American saints in every faith tradition, and in every family and every neighborhood.

You know them. They are the hidden saints, saints of the everyday — holy wives and holy husbands, working hard to do what is right, sacrificing for their children; being good friends and good neighbors; serving the poor and working to make their communities stronger.

We need to hold these people up as examples. Tell their stories. We need to try to be like them in our own lives.

One American saint who means a lot to me came to this country as a refugee. They called her Mother Luisita. In the Church we call her Venerable Maria Luisa Josefa of the Blessed Sacrament.

She was a servant of the poor, a teacher and a healer, a wife and a widow; and later she became a religious sister. Mother Luisita sought refuge in Los Angeles during the anti-Catholic persecutions in Mexico in the 1920s.

America welcomed her and the Catholic Church took care of her. And she established a religious community that is still thriving in Los Angeles.

Mother Luisita used to tell everyone, “For greater things we were born.”

America’s founders — the missionaries and the statesmen — they knew this truth. They knew that we belong to a story that began long before us, the story of our Creator. They knew that we are born with a dignity and a destiny that can never be denied. No matter who we are. Or where we came from. Or how we got here.

Dear graduates, now it is your turn to hold these truths and to tell them to a new generation.

The new America is a story that we are writing with our lives. By the decisions we make, and by the way we treat other people.

My prayer for you is that you will write a story that is filled with goodness, love and service; with prayer and giving thanks for simple gifts. I pray that you will always seek to know what is right — and have the courage to do it.

People will tell you this vision is naïve; that it doesn’t pay; that we are too far gone for all that. Don’t believe them.

The American story is not over yet. It continues in you and in me. We can still rely on the protection of divine providence. We can still open our door with confidence to people who are yearning to breathe free. We can still practice a politics with malice toward none and charity for all. We are made for greater things.

Thank you for listening. Congratulations, Class of 2018! May God bless you and your families and our great country.